on both sides at all levels condemning and apologizing for disgusting conduct at a public event.

What fascinates me is how he could be so dsconnected from common culture that he wouldn't realize this behavior would ruin his career. This ban is only the first of many on the rodeo circuit.

Some in the crowd did cheer him as he ran around in an Obama mask with a broomstick attached to his rear.

Maybe he'll have a new career entertaining at private parties. 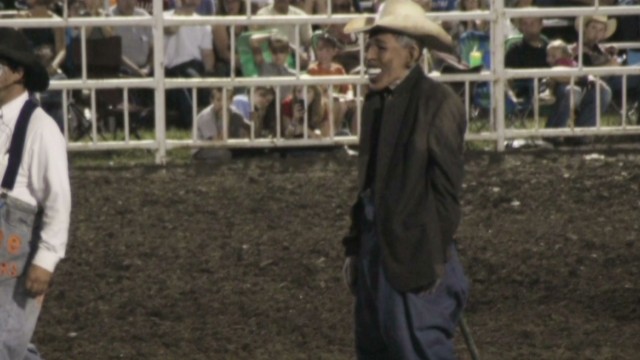 
(CNN) -- A rodeo stunt at the Missouri State Fair has come under criticism after a clown donned a Barack Obama mask and stuck on a broom that descended from his backside.

The stunt took place during the bull riding competition on Saturday night.

Another voice is heard over the loudspeaker working up the crowd and saying, "We're going to stomp Obama now."

CORRECTIONAn earlier version of this article incorrectly attributed inappropriate comments made about President Obama at a rodeo to announcer Mark Ficken, the president of the Missouri Cowboy Rodeo Association. The remarks were carried over the loudspeaker system, but were made by a rodeo clown. CNN apologizes for the error.

"Hey, I know I'm a clown," the second voice said. "He's just running around acting like one. Doesn't know he is one."

The stunt sickened Perry Beam, who came to the fair in Sedalia with his wife and a student from Taiwan to "give him a little piece of Americana."

Beam likened the atmosphere to a Klan rally.

Opinion: Racist taunts at Obama should worry us all

The student, Jameson Hsieh, recorded a video of the incident, but had little to say afterward.

"He didn't say anything. We rode all the way home in silence," said Beam, who lives 50 miles away in Higginsville. "We were just ashamed, and he didn't ask any more questions. I think he had seen enough. It is just disgusting."

"The commission reiterated that the statements and actions Saturday night were inappropriate and not in keeping with the fair's standards," the agency said in a written statement. "The Missouri State Fair apologizes for the unconscionable stunt."

The board of directors at Missouri Rodeo Cowboy Association also issued an apology.

"The Sport of Rodeo is not meant to be a political platform. We are taking measures by training and educating our contract acts to prevent anything like this from ever happening again," a statement on the group's website said. "All Members of the Missouri Rodeo Cowboy Association are very proud of our Country and our President."

And Republican Lt. Gov. Peter Kinder called for those responsible to be held accountable.

"I condemn the actions disrespectful to POTUS" -- president of the United States -- "the other night," he said in a post to his official Twitter account. "We are better than this."

"The state fair is funded by taxpayer dollars, and is supposed to be a place where we can all bring our families and celebrate the state that we love," she said. "But the young Missourians who witnessed this stunt learned exactly the wrong lesson about political discourse, that somehow it's ever acceptable to, in a public event, disrespect, taunt, and joke about harming the president of our great nation."

Our idiot pres and his minions are waaay to sensitive. - Honestly

[ In Reply To ..]
Making a man lose his job because you happen to be offended by his actions. Hell, if that were the case for average everyday people, most everyone would be without a job. This president sucks and so what? Big deal. waaaa waaaa. Please, spare us the indignation.

Oh, Obama had NOTHING to do with it. Missouri officials - conservative and others rushed to

[ In Reply To ..]
condemn this behavior and make sure it didn't happen again.

Most people who didn't vote for President Obama do feel respect for the presidency and find this sort of nasty behavior from the fringe unacceptable.

As said, how could this clown not realize how extremely offensive most Americans would find this? Not just Americans. This bizarre event is being reported in media around the planet.

Note, he's not employed by the Kansas State Fair and he didn't just lose a JOB. He destroyed his entire career.

Probably McGraham was the one who rushed off to be PC. - me

Not only way to sensitive but way too stupid. Did you hear (sm) - LM (the real one - you won't like this)

[ In Reply To ..]
how they mucked up the surface to air missiles they were sneaking off to Syria through Benghazi? They were stolen by Al-Quaida.

[ In Reply To ..]
I'm sure Obama had nothing to do with that either.

Of course not. He's out acting like a ballet dancer on the - golf course.

Yes, I'm sure Obama personally had a - hand in this. LMAO.

He seems to be hurting for attention these days. - nm

I live in Missouri and I hate when stuff like this happens. - me

[ In Reply To ..]
It makes us all look so stupid and hillbilly-ish. In reality, we are a pretty diverse state, ethnically and every which way.

But there is a contingent in the central region that is extremely racist. I mean, we had segregated schools until the late '50s.

Well, I'm in the most conservative county in Georgia - but clownish wingnuts are just a small minority.nm

And some cons are missing this point: Disgusting - behavior like this DRIVES AWAY VOTERS. sm

[ In Reply To ..]
Whether it's somebody speaking a little too freely on the patio after a second beer or stories of obscenities acted out by rodeo clowns, most people are repelled and disgusted by hateful and irrational behavior and don't want to be associated with it.

Would expect nothing less from Missouri - Home of Todd Akin

[ In Reply To ..]
and the rest of the legitimate rape nut cases. And by the way, I live in Missouri, admidst some of the most ignorant, racist, welfare-collecting yet welfare-condemning nut jobs that you ever saw in your life.

Oh, dear. :) All states have their Akins, though. And - districts gerrymandered to elect them. nm

[ In Reply To ..]
wonder where it was in 1994?
In the wake of ‘Clown-gate’ at the Missouri State Fair, it appears that professional rodeo clowns will think twice before mocking the president.

In 1994, Douglas A. Campbell, a writer for the Philadelphia Inquirer chronicled a rodeo clown event featuring George H.W. Bush.

The big white gate flew open. The bull came out bucking. The rider flopped from side to side and the bullfighters held back, letting the bull make his moves until the rider dropped off. Licciardello crouched in a heavily padded barrel, a human target should the bull decide to charge. Hawkins waited near the barrel, holding his big inner tube. A dummy with a George Bush mask stood beside the clown, propped up by a broomstick.
…
T.J. Hawkins rolled out the big inner tube, and the bull lowered his head, shot forward and launched into the tube, sending it bounding down the center of the arena. The crowd cheered. Then the bull saw the George Bush dummy. He tore into it, sending the rubber mask flying halfway across the sand as he turned toward the fence, sending cowboys scrambling up the fence rails, hooking one with his horn and tossing him off the fence.

The outrage was big and loud. I remember. I was outraged - at that insult to the current POTUS. The

[ In Reply To ..]
presidency is far more than the people who occupy it temporarily. Just as now, although that vulgarity was not obscene and, I might add, the insults not nearly as bad.

Please note, even if it's hard to imagine, that I've never hated W, not then or now. A friend, a conservative retired Air Force captain in his 60s considered W evil because many things he did were evil. I thought that was giving a shallow man with a lazy mind and almost no intellectual curiosity too much credit for ability to comprehend profoundly complex issues. He was just an unfortunate choice others made, a very ordinary man too unthoughtful to realize how inadequate he was for that job.

Our local rodeo is like that. only they - IMANMT2

[ In Reply To ..]
would never mock a republican president. Its all patriotism, and conservatives, God, country... It plays well with the rodeo crowd. But they don't mock republicans... ever. This is the 105th rodeo, PRCA sanctioned in conjunction with the interstate fair.

Its a bargain. Every night of the rodeo you'll get a sermon from horseback (the fav announcer is a preacher, now), a political dialogue between the announcer and the clown miked up - two VERY knwledgeable and informed folks for sure, and a rodeo. All you have to pay for is the rodeo. He may cut the sermonizing out since Sunday they let him have Cowboy Church at the arena (he is kind of a big wig around here - usually gets what he wants) but the Obama and Hillary jokes will definitely be in. Everybody laughs. Well, maybe not everybody but I guess they don't count, their ticket cost less or something. And nobody there is on food stamps or any other form of public assistance. Sure. I love the rodeo I go every night but in 40 years I've learned something, if the rodeo crowd was a fraction there would definitely be a common demoninator.

Wow. :) Thanks for the view from your area, IM. - Okay with me as long as it's strictly private

[ In Reply To ..]
it were too offensive for us, we'd just leave. (Frankly, the same thing occasionally goes on at some private parties we attend.) The issue, of course, is when public-funded events behave this way.

Your rodeo helps explain, too, how that clown thought he could get away with obscene and threatening mocking of POTUS. Maybe with all his traveling around he didn't notice this one was a STATE fair.

In any case, interesting peek at your rodeo. Enjoy. :)

[ In Reply To ..]
The hypocrisy is astounding

plenty of liberals respect the office of president - sm

Just not when a republican is in - nm

[ In Reply To ..]
Nobody's trying to fight with you. You don't have to keep throwing punches.